The purpose of the ride is to show the students the world by bicycle. Hopefully getting them into cycle touring and demonstrating that you dont need a car in this world. There are plenty of options from cycling to walking to using buses and trains. You can make your journey faster than using a car by using a combination of methods. For example ride to a bus stop or train station with your folder and jump on public transport. At the other end unfold and be away in seconds.

The students get a real taste of touring. They carry their own gear and cook their own food on single burner stoves. They decide what they are eating and either bring some dried food ready at the start of the trip or buy each day from the shops that we pass.

We also raise money for the school which is another perk of the ride for the school. Each year we have raised over £10,000 and this year the total was over £11000. As I write I don’t have the exact figure but I don’t think we were far off the 12k target we set ourselves.

As we were doing the Way of the Rose’s route this year, and we were doing it backwards we also put in the added challenge of the Three Peaks Walk on the penultimate day.

The evening before we set off we met the students at the campsite at Flambourgh Head. They put up their tents and later that evening they did some practice with the stoves by making a hot drink.

We woke early in the morning every day and had a routine of making breakfast, taking down tents, packing our bikes and then it was off for a day of riding. 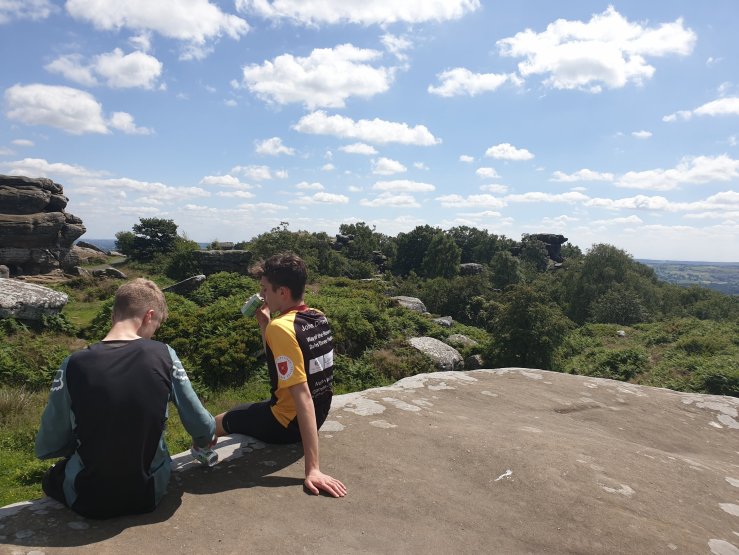 At lunch we would find a nice cafe or farm shop and the students could buy something or eat what they had packed up that morning.

When we reached our next campsite the students would pitch their tents, cook their tea and then play games or chill. We were very lucky with the weather so there were lots of space we could use on site.

A parent joined us for our ride into Settle and this just proves the family aspect NHGS has. We all pull together for great experiences.

On the day of the Three Peaks Walk another member of staff (David Fountain) came to join us to lead the walk. We were up at 0500 in the morning. The students had to make breakfast and pack enough food to keep them going for the day.

We had walked the first peak by 10ish and the students just kept going. Second peak…..done……third peak completed. David’s plan was to keep us in three groups and keep the distance between each group the same do we could congregate at the top for pictures and then stagger the groups off, the system worked perfectly.

The final day of the ride is always filled with anticipation and excitement. We only had thirty mile to do so we keep it nice and steady to try to minimise mechanical issues and punctures.

The parents were all waiting at the finishline in Morecambe and it is such a buzz seeing all the banners and hearing all the applause and cheering.

It was another amazing coast to coast ride and I am so grateful to the parents for helping to raise such a large amount of money and all the effort they put in getting their sons and daughters equipped with touring and camping gear.

The ride would not be as successful and safe without the professionalism of the NHGS staff that make up the C2C team, I thank you very very much.

And the students. Again this year you were amazing! Your behaviour was right on. You have demonstrated your ability to be independent and resilient. You can prove you can push yourself and get stuck in to achieve your goals. You are brilliant team workers and I love the support you have for each other.

Well done and thank you to everyone involved.